One Mummy’s story about getting the courage to head to a field for a week with a old, a Nipper Single and 200,000-odd other people.

I bought my Glastonbury ticket in September, still not daring to believe that Oriana was real. Labelled AMA by the hospital, my head was filled with the stats and scary stories of many friends and family. I could scarcely hope!

With an early arrival (by a few weeks) in January and wow has life changed! For the better in every way that I could never have predicted. I’m in love!

What to do about Glastonbury?

I still couldn’t face the idea of skipping Glastonbury and wasting my ticket! Was I mad? Maybe, and certainly delirious from sleepless nights, but even so I imagined that it must be possible and so my research began. I wanted to share the awesome Glastonbury experience with my darling daughter! So what to do about Glastonbury with baby?

Despite going to Glastonbury 5 times before, I had no idea about the family angle, and I’m ashamed to admit, had never even considered it’s existence.

I joined every Facebook Group and forum discussing #Glastobabies as well as every other festival group for tips that I could find. The chats were filled with advice from Mummy’s and Daddy’s that were old hat and knew exactly what they were doing! I gained hope!

The questions were already asked in every group 10 times over.

The biggest decision point always came back to mobility at the festival. Time and time again the answer came back across different platforms, discussions and more, that the very best thing that you could take to a festival was an Out n About Nipper 360.

I was intrigued. I had briefly heard about Out’ from my little sister, who recommended that I get one if I ever bought my own buggy so I could run — Yes, I’m also a closet runner … I traditionally give my legs a good stretch a couple of times a year, usually for a half marathon like Brighton.

I looked around and researched further and really fell for the idea of getting an OnA for Glastonbury. Again – a lucky year for me – my significant other treated me; otherwise, we’d have been making do with a pretty ancient *CENSORED COMPETITOR* buggy hand me down that struggles on the streets of Cambridge (pot-hole central). I feared that I would get to the festival and need to bail, heading home early as expected by the nay-sayers (the shame)!

Blue – as my favourite colour is red and his is purple, instead we opted for blue as the colour suits us all best!

I obviously was not only researching this angle of the festival, and with lots of experience, I was perhaps a little overzealous on scenario planning. Yes, I borrowed my parents SUV and filled it to the ceiling with everything I could possibly squeeze in. I’m ashamed to say that I definitely overpacked to the tune of x 4! Ahhh well. At least I was able to do this – in previous years I’ve caught public transport!

I also, for the first time ever, got a bell tent in Worthy View (yes, I knew about ***THE*** hill but was not worried as I’m half Swiss). It meant that we had a 4 person space – lots of space to bring the buggy inside and to set up a nappy change area! Luxury (- oh how life has changed)!

So those lonely 4 am feeds lead to ridiculous online shopping escapades, and one of these was the decision to have the best buggy at Glastonbury. You need lights to ensure that you can be seen and that people partying hard have fair warning that you’re there. So … I went to town!

Awesome glowing strip lights with 20 different settings, fairy lights, rainbow leis, toys, trusty steriliser balls, XL battery chargers… I can safely say that I had one of if not the very best dressed buggy! 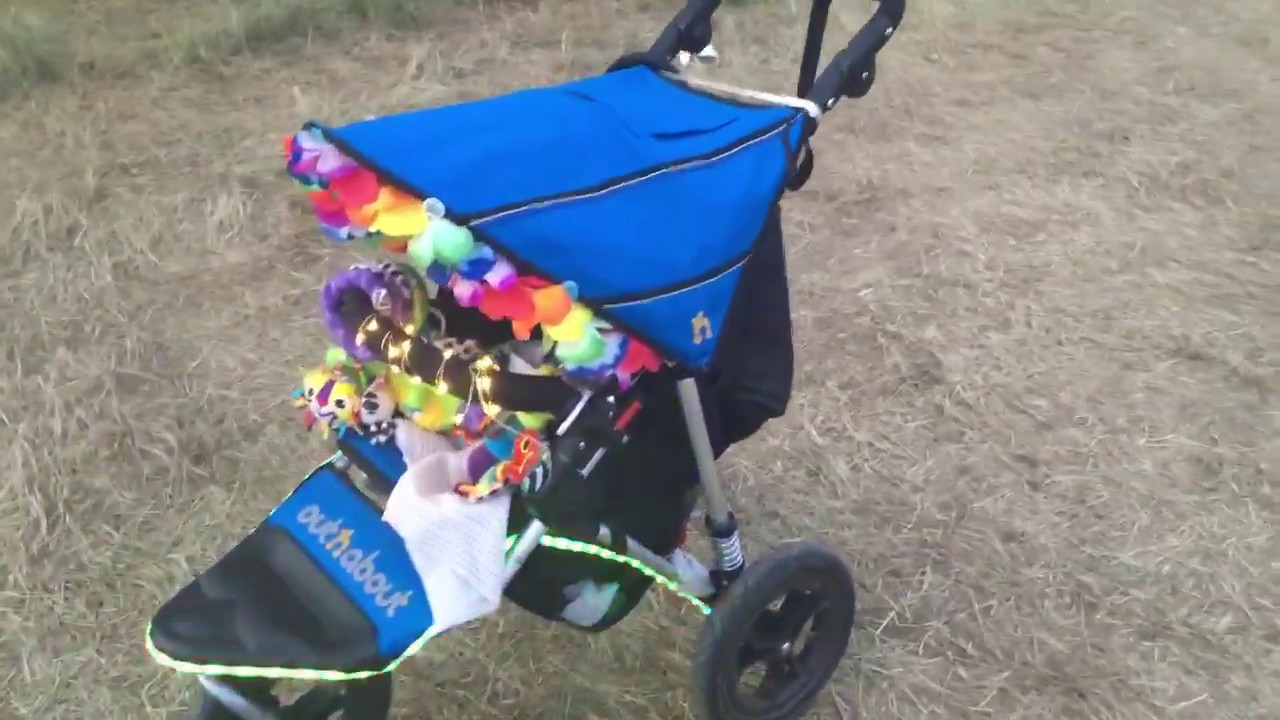 I rocked up for an unbelievable festival experience – NO MUD? I wasn’t even sure I was at Glastonbury … crazy! The weather predictions had said as much but, again, I just couldn’t believe them. This was Glastonbury! There’s always mud!

A muddles year! The would likely have been great in mud, but I can certainly vouch that it was the perfect buggy for terrain, making light work of the off-road paths and that hill became non-existent. I swanned past those with trailers or carts pushing one-handed. I cannot recommend this enough for getting from A2B across a field and leaving you with plenty of stamina for dancing throughout the day!

The sun came out with force. I was unable to use my sling at all on the Friday and Saturday due to the heat. Our Out’n’About was again a saviour as it has an oversized hood and we also had the shade for the morning and evening rays. Oriana was cool and shady, and we could even change her on the ONA if we needed. This was, without a doubt, the best festival investment that I’ve ever made.

This was, without a doubt, the best festival investment that I’ve ever made.

It turns out that if you want to fix that extended 4-month sleep regression, camping is the way forward. Oriana slept really well in the tent regardless of noises around her. Surprising as if you even swallow loudly at the wrong time you’ll wake her usually! Get the tents out in the garden … or better yet, go to a festival!

We glided around the festival and can firmly vouch for its family-friendly orientation. I cannot believe I hadn’t noticed before! The NCT tent, KidZ Field, and Green Peace area… what’s not to love!

Oriana had her first biology lecture (Embryology by Dr Alice Roberts – and got a photograph afterwards with her), and had her first political presentation by Caroline Lucas (as ex Brightonians we approve)!

She heard hundreds of thousands of new sounds including Morcheeba, Janet Jackson and Liam Gallagher. Not forgetting beloved Kylie, outrageous Miley, then topped it all off with a late-night show of The Cure. Sadly she missed David Attenborough as Mummy and Daddy shamefully went to get some food! Doh….

Oriana glimpsed examples from every which way in life, got her first job as a volunteer Worthy Warrior (Farm Protection) and wore her first uniform because of it. She saw the Extinction Rebellion parades and loved the outfits.

The Out’n’About Nipper Single has surpassed our expectations in every way. It’s light and easy to control. It’s comfortable and our daughter loved riding in it and snoozing in it. Its performance was faultless!

The Out’n’About Nipper Single has surpassed our expectations in every way. It’s light and easy to control. It’s comfortable and our daughter loved riding in it and snoozing in it. Its performance was faultless!

The walk to town is now very boring for Oriana, after the most delectable colours, sensual dazzlement, musical overload that is the amazing legendary Somerset festival. Will I be going next year with Oriana and our trusty OnA for the 50th Anniversary? Bet your bottom dollar I’ll be trying my hardest to get myself a ticket!

In the meantime, where to go next with my dressed up buggy? Why of course – time to hit the Alps for National Swiss Day (1st August)!

PS Still debating whether to run the Brighton Half next year… will these boobs go down enough? #MummyConcerns #QueSera

If you would like to write an article for our blog, please drop us a line by filling in the details below and we will get back to you.

2 Year Warranty
on all buggies

Please wait while you are redirected to the right page...